This post is about a walk in the October half term of 2015. On the 30th October we drove a couple of miles towards Bontddu and aimed for some new paths that we had not walked before. The exact starting point doesn’t really matter as there are lots of paths lower down. We cheated a little bit as we parked up one of the narrow roads which both covers some of the distance and some of the height.

Diffwys can not be seen from Barmouth. It is a peak hidden by lower hills that rise sharply just beyond the town. However it can be seen from the estuary and your eye is drawn to it from the other side of the estuary in Fairbourne and Llyngwril. This first picture is taken from Llwyngwril in the summer of 2014 and Diffwys is the high peak to the right of the picture. 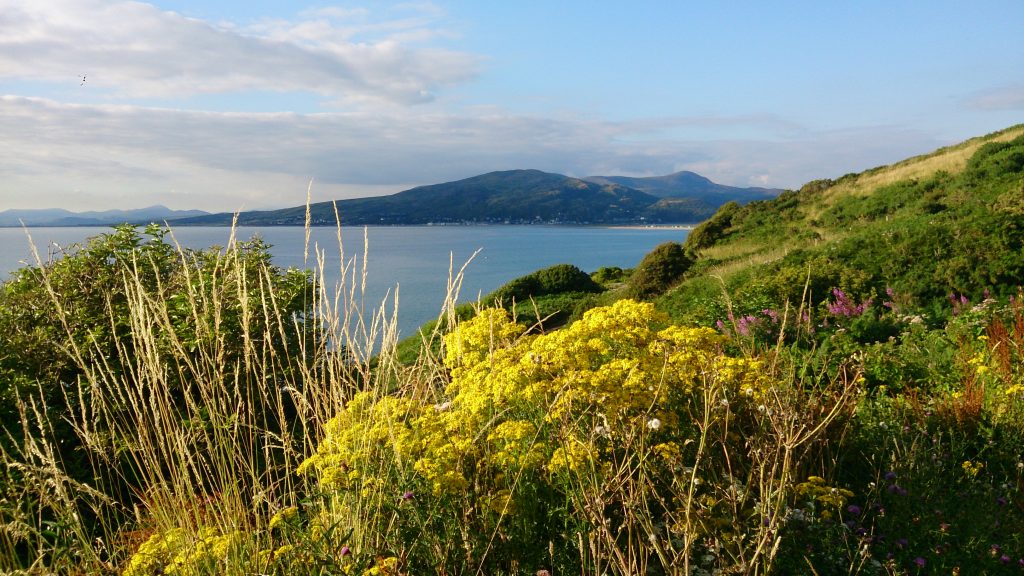 There was no whole plan as we set off and it was only when we got so far that the plan changed to include Diffwys. I think the original plan was just to head south at the path junction where we head to and from Diffwys over the same ground.


An alternative walk, starting in Dyffryn Ardudwy, taking in Y Llethr and Diffwys can be found here. The walk up the river through the wood is lovely at all times of year. We have never done this whole walk, although we have done lower variations taking the northerly path, staying relatively lowdown, at Pont-Scethin.

The following pictures were all taken on the day of the walk, 30th October 2015. This first picture is early in the walk and shows a little of the Mawddach estuary. 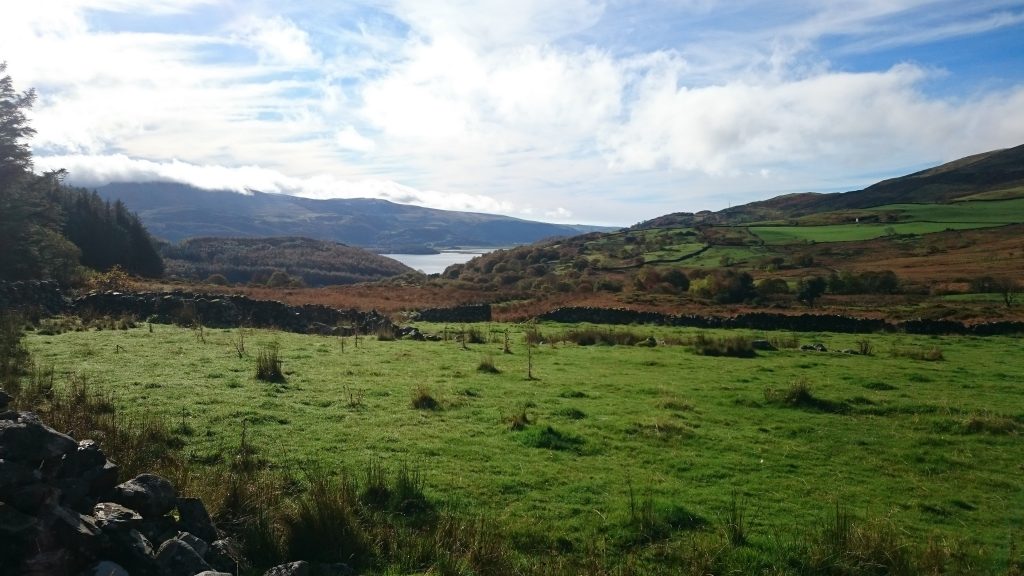 We have just done the first bit of tough climbing as we head north up what I would call the back of the hill ie the bit facing away from the sea. One great benefit of walking in the Rhinogs is the sea views. Thinking on my toes, another benefit is the relative lack of other walkers. We only met two or three groups all day; although one of the groups we met near the summit were “real” walkers. They had walked all the big Rhinog peaks the same day and Diffwys was their last. For a real walkers blog about walking in the area start here and see where it takes you. There is a lovely video in the comments about a walk of all 4 big peaks on a windy day in early January! Anyway, this photo is a rare picture of me; I think I may be pointing toward Cadar Idris. Not really sure. 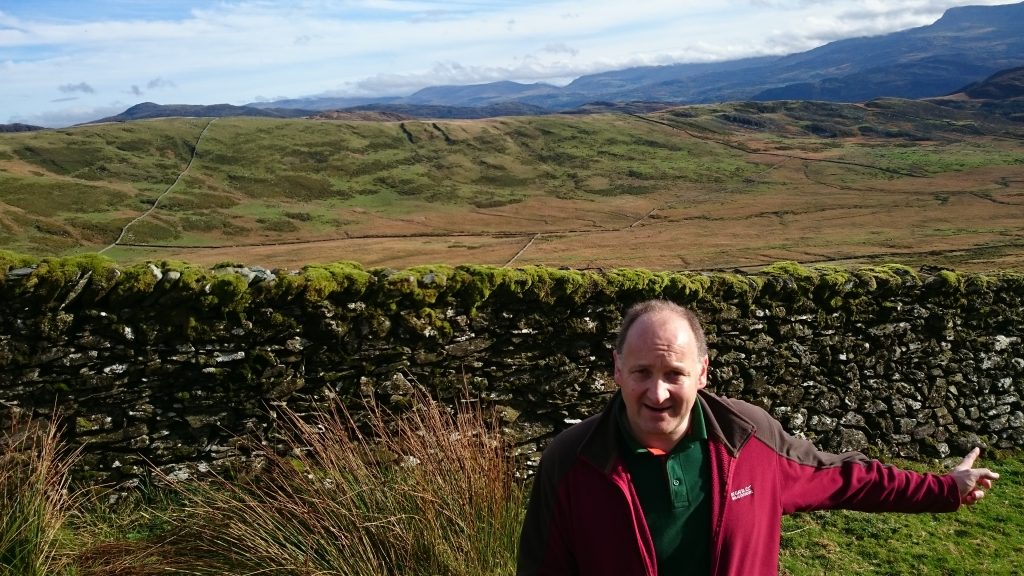 It’s a lovely day early on, even high up, as the “big kids” are in their singlets. It’s often the case in the Barmouth area that the weather is as warm in late October as it is in the summer holidays! 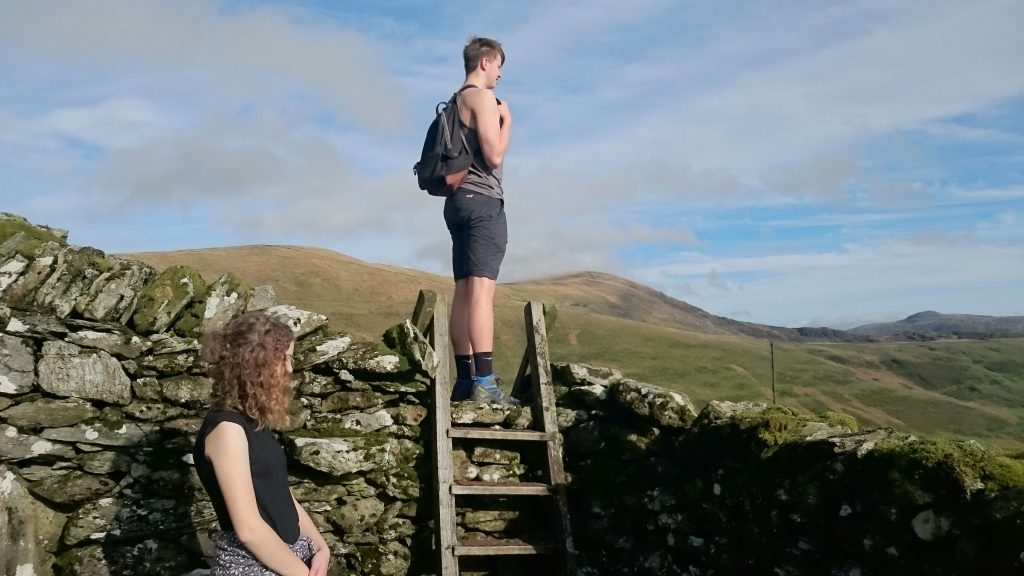 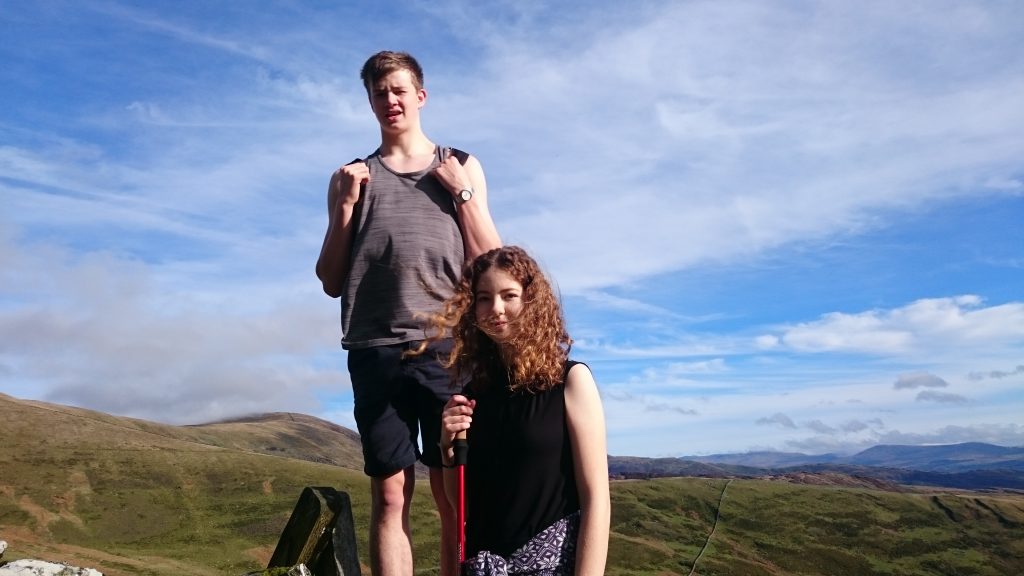 The views from high up, with or without the sea, are becoming spectacular. We don’t walk this high up very often, but it is an exhilarating experience. Looking down is starting to make all that hard uphill walking worthwhile. 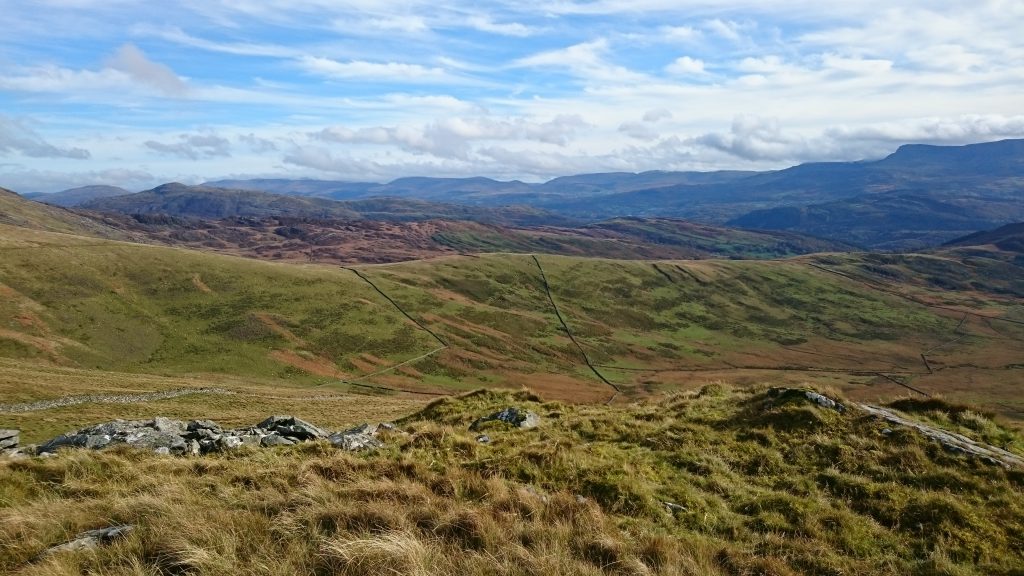 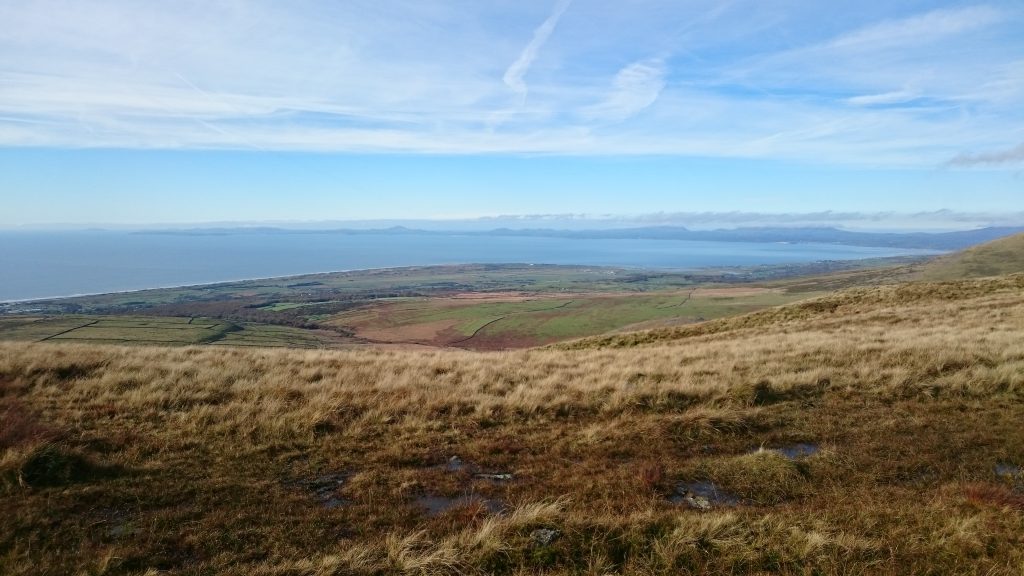 Another view across to the fairly distant Cadar Idris. 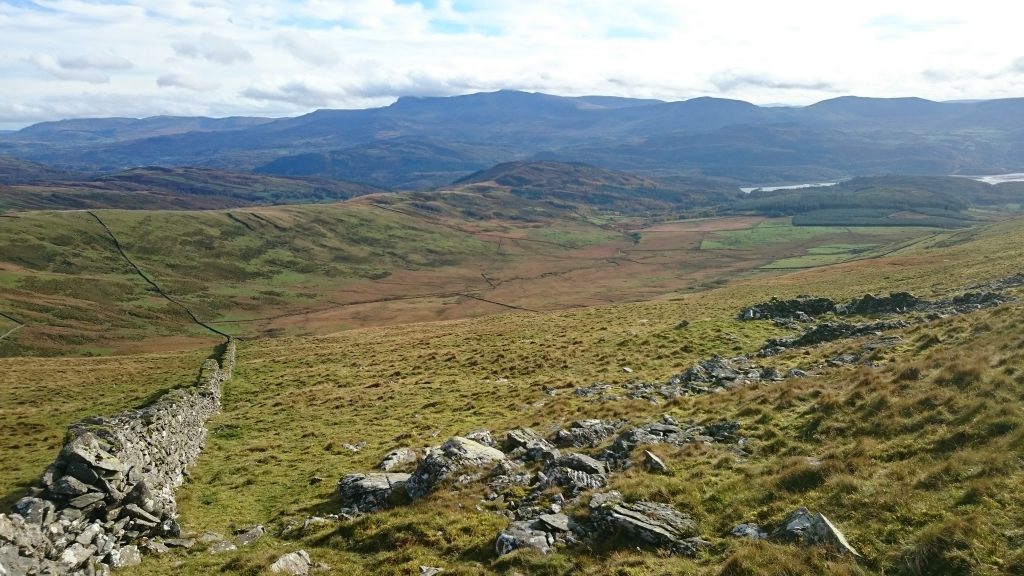 We have for many years holidayed at Dyffryn Seasisde Estate. The view from there is dominated by Moelfre looming large over the surrounding area; with its distinctive small tree plantations on the side. It is odd to be looking down on Moelfre. 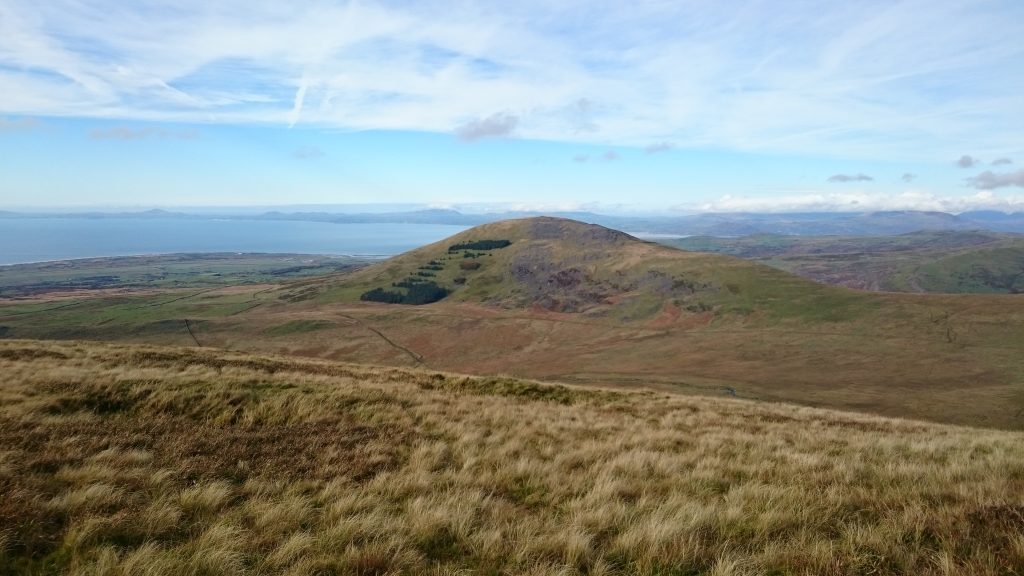 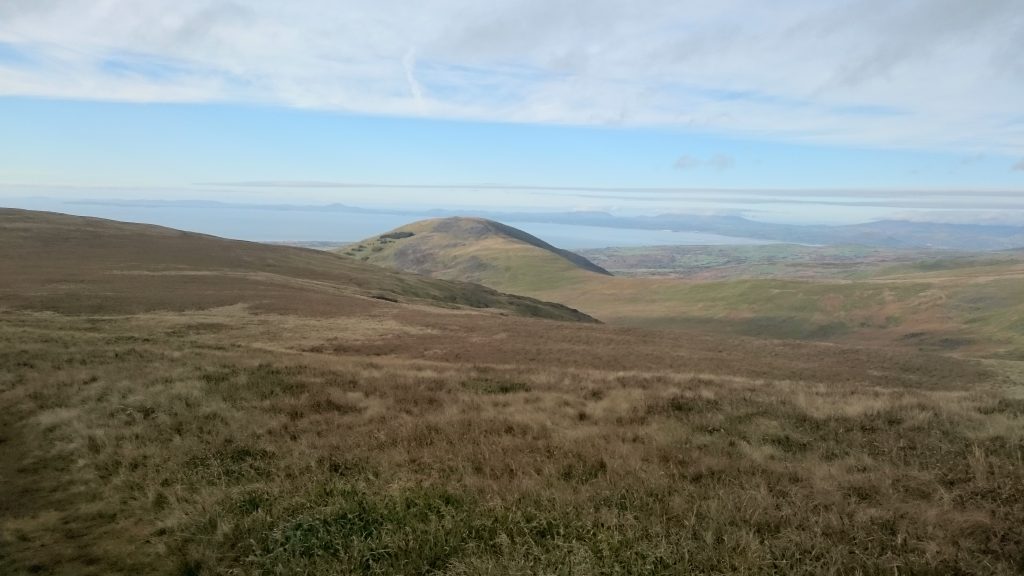 Here we are at the Diffwys trig point. The nice sunny weather has disappeared and the cloud is coming in. One jumper on and one t-shirt. This holiday week was an odd one for weather; it really rained hard most nights and was dry every day. Obviously, that’s the way you want it when it rains. But some of the paths were really starting to feel the weight of the rain by the end of the week. Then in November the rain really started and I remember driving home one Monday night after a clean and losing a part of my back bumper due to road flooding near Foel. November and December 2015 were horrendous for rain – see Recent Barmouth weather stats history. 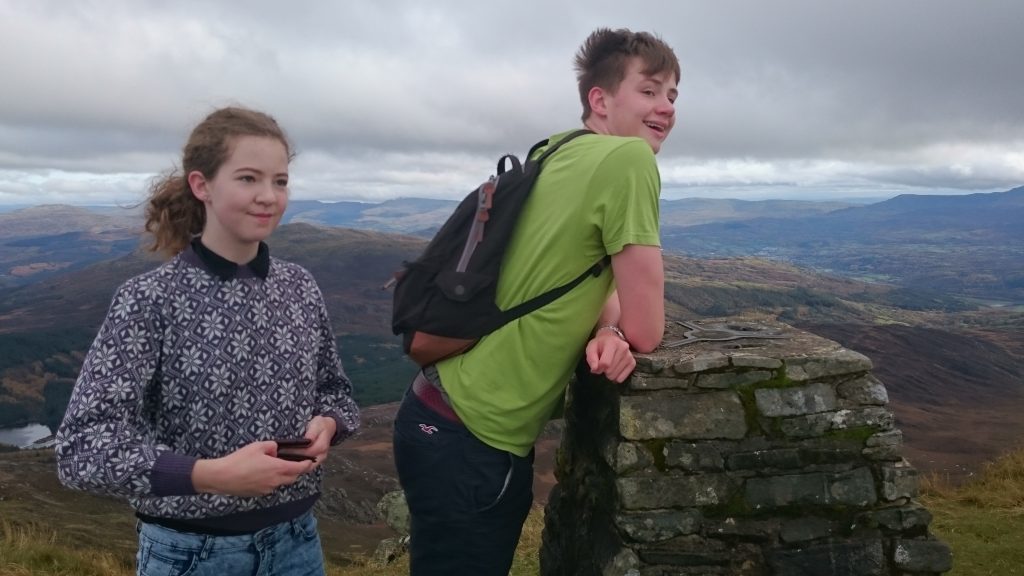 The view east from the trig point. If you read on you won’t see a view to the north. It’s fairly flat in that direction (towards Crib-y-rhiw and Y Llethr) and not as pretty, but it isn’t too much further or much up and down to Y Llethr. We hadn’t planned to be at Diffwys and it was already going to be late when we got back down, but it is a fairly easy extension (along the ridge/top Crib-y-rhiw). Our group definitely had one person slowing progress: me! 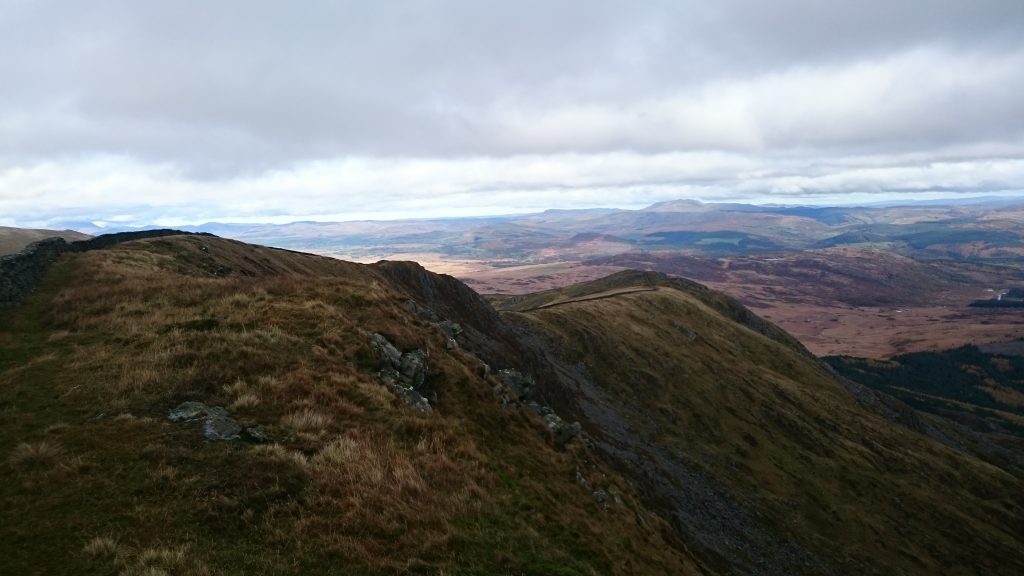 The view south to Cadar Idris. 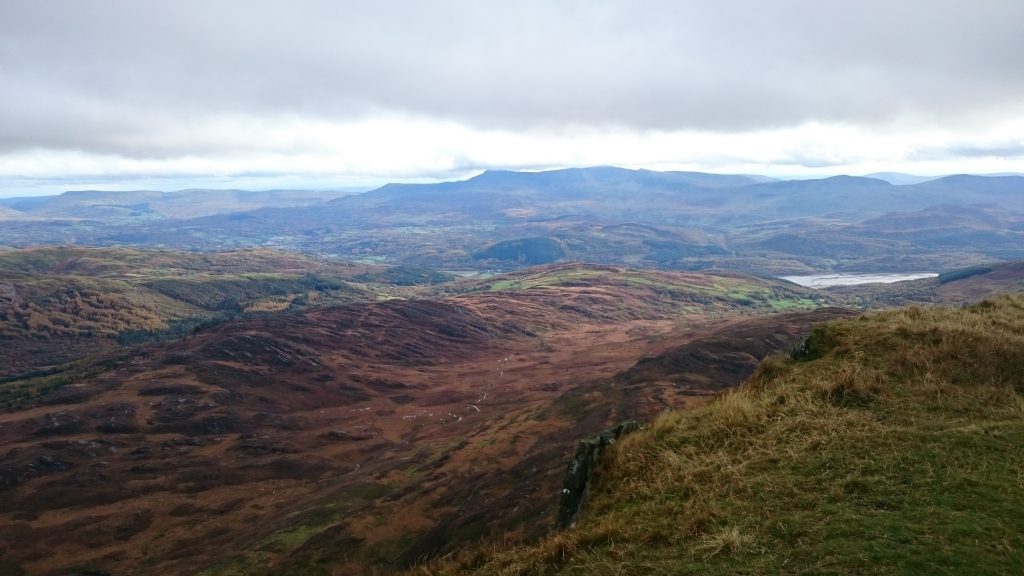 The view south west over the mouth of the Mawddach estuary. 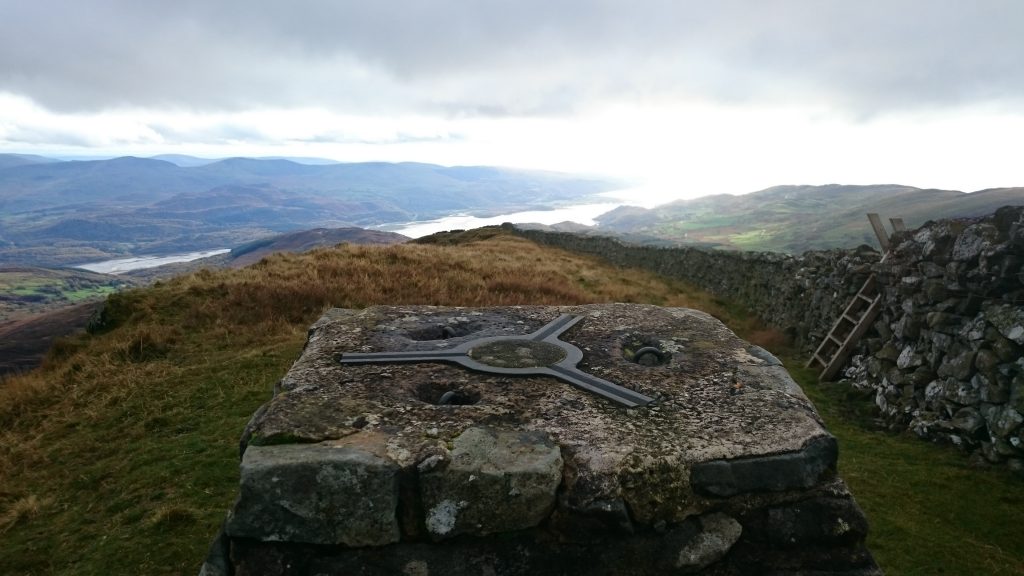 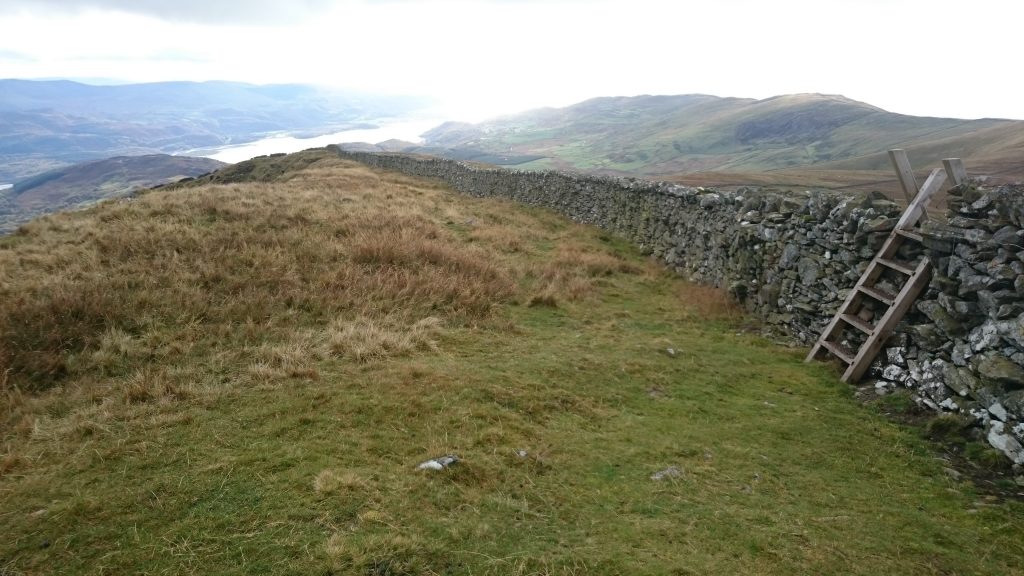 Another view looking down over Moelfre, this time on the way down. And the last bit of blue sky for today. 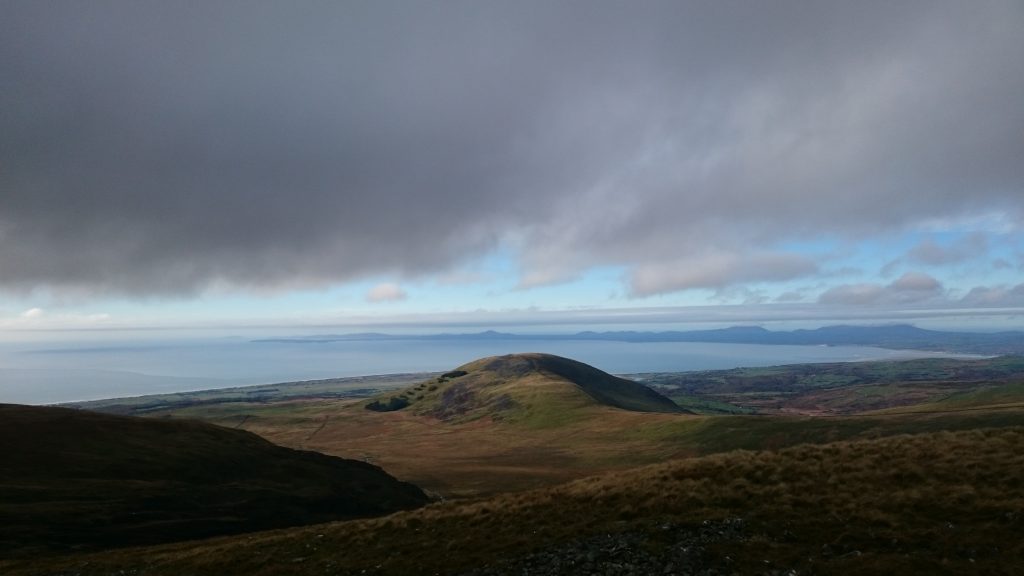 An awesome panaroma, not done justice by this photo. 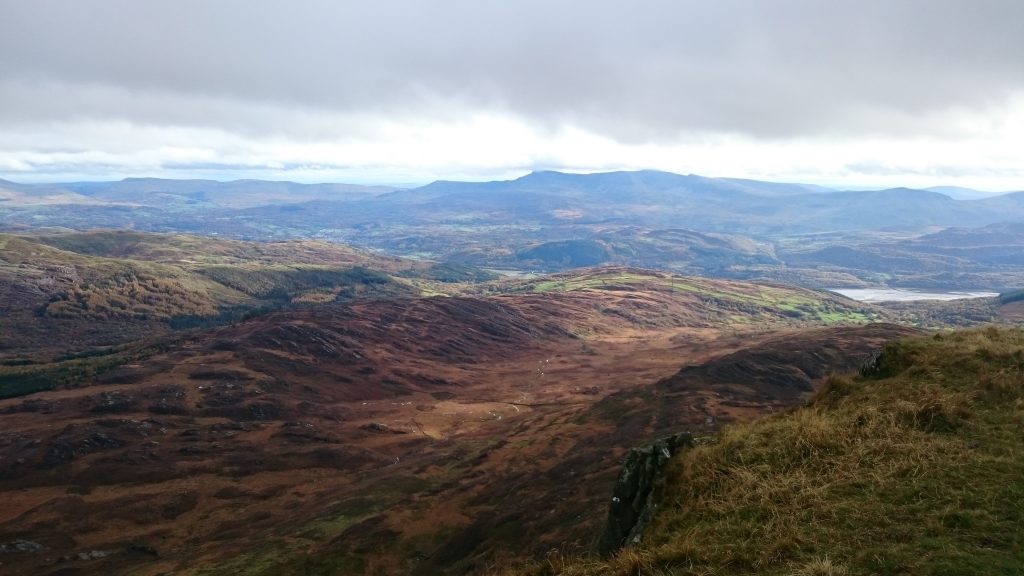 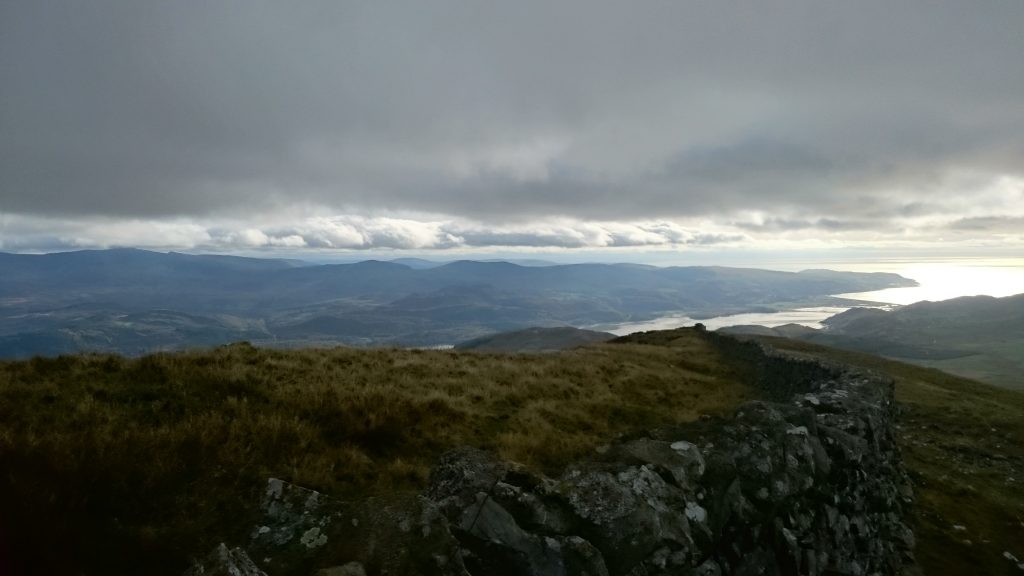 We are effectively now back on plan and heading down. This picture is on the path heading south, just after the detour to Diffwys. 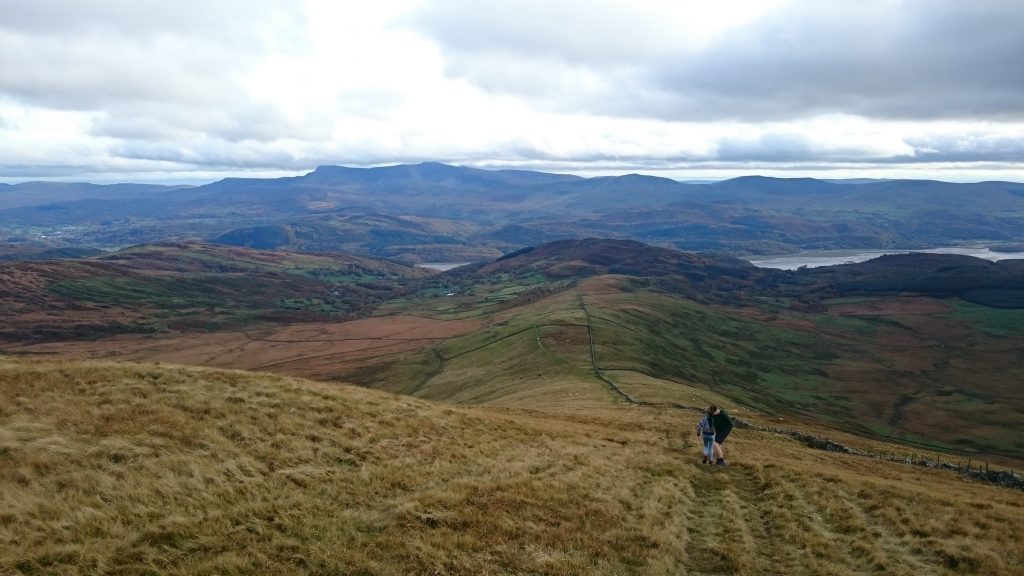 There is a big time gap between the last photo and this “last photo” where we are on a path (or is it a road?) fairly near to the car. We were tired and had walked over a lot of paths lower down that were flooded by the recent big rains. But this didn’t ruin a good walk and a good day. Time for tea. 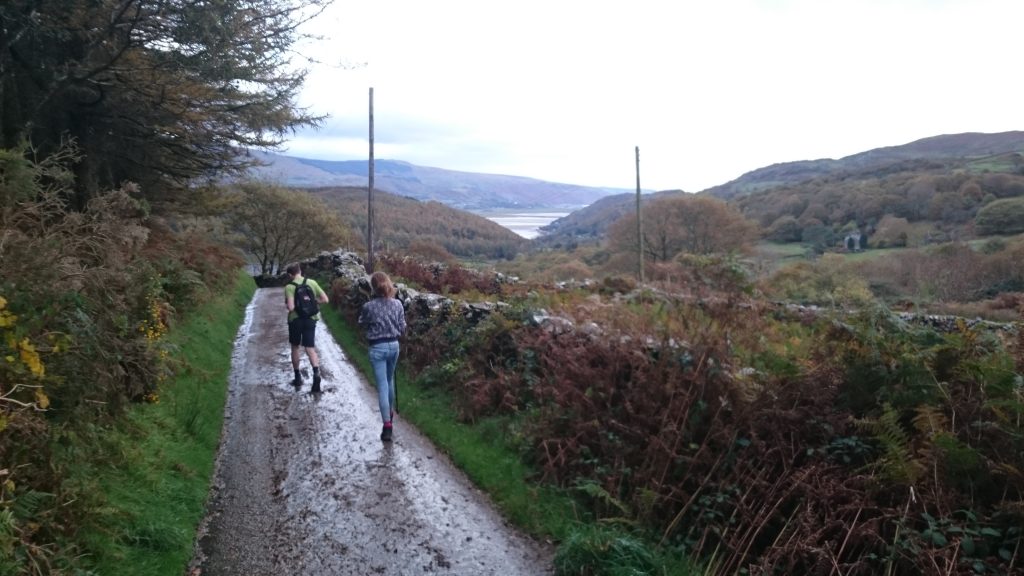